Weller on the podium in Reno 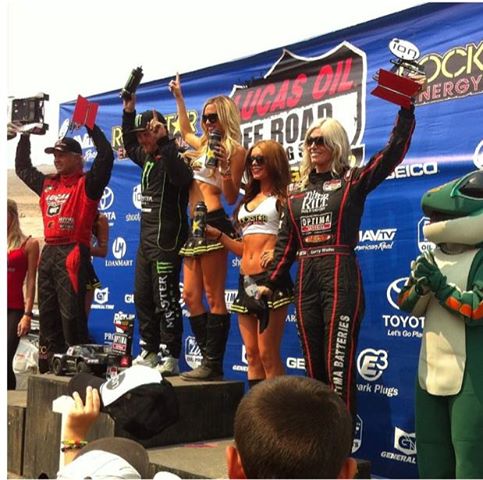 "We knew we had to make some changes after Glen Helen," explained Weller.  "We were literally working on the Reno race as we were driving home from that weekend.  Short-course racing can be tough physically and mentally, so much of your success or failure stems from your ability to rebound and stay focused on what lies ahead."

Excited for a 2nd year of short-course racing in their city, the fans from Reno came out in full force, and the Optima Batteries/Tilted Kilt driver spent hours signing autographs and taking pictures with established and brand new fans of off-road racing, while her crew made sure her truck was ready for the weekend.

The team used Friday's practice and Saturday's qualifier to make changes and tune Weller's suspension for the huge, high speed jumps that the Wild West Motorsports Park is known for.  When it came time to race on Saturday, Weller was ready.

Starting near the rear of the field, Weller had her work cut out for her, and at the drop of the green flag, she began her task of working through the pack.  With the help of a few caution flags and some quick reflexes to avoid a few pile-ups, Weller found her groove and had worked her way up to third place at the final caution flag of the race. With a pack of Pro 4's behind her, she had one lap of furious racing to hold her position and take the podium, and hold it she did, crossing the finish line just behind multi-champion Carl Renezeder for a third place finish.